Watch a video photo display of the 1904 trip from San Francisco to New York in an air-cooled Franklin car.

From the Club Library: Images and Ad copy from a record breaking drive from Chicago to New York in a 1908 Type-D Franklin. 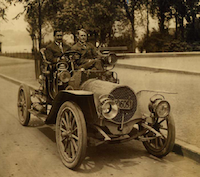 Click here to view scans of original photos from this 40 hour drive in 1908 with introductory text.


1904 and 1906 Transcontinental Pictures
from the Franklin Club Library

The historic photographs below are from a pair of photo albums held by the library that cover the 1904 and 1906 transcontinental runs. Messrs. Whitman and Carris drove a Type A cross engine Franklin from San Francisco to New York in 1904 taking 33 days for the trip. They were joined by Mr. Daley, Mr. Bates, and Mr. Harris for a similar run with a six-cylinder Type H Franklin in 1906. By dividing into two teams and driving in shifts, they cut the time to just over 15 days. There are also a few pictures in the set from the Chicago to New York record run in a 1908 Type D Franklin by a team headed by Mr. Carris without Mr. Whitman.

There is a complete set of about 200 pictures taken during the runs along with the factory advertising brochures describing the journeys. No culling or editing of the pictures has been done thereby preserving their historical context. Many have issues with motion blurring, focus, exposure, and framing as well as tears, stains, and emulsion problems on the prints themselves. They are collected here into several reasonably sized PDF files at low resolution (200 DPI) for faster downloading. The original c. 4 x 5-inch photographs were professionally scanned and adjusted at very high resolution as individual Photoshop files. Each file is about 25 megabytes. If any club member needs a full resolution scan of any selected pictures, they can be sent via Dropbox™ (with a link) upon request to library@franklincar.org>

Click here to view ALL pictures with a title slide.

Click here to view Whitman's published description of the journey.

Click here to view an article from Scientific American of the journey.

Click here to view ALL 94 pictures with a title slide.

Click here to view several newspaper clippings about the event.

Click here to view an advertising brochure based upon the event.